‘The most qualified supplier’ award from Toyota to CMS Wheel 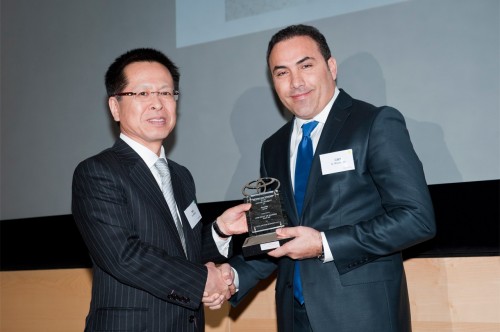 CMS wheel has been chosen, in the quality branch, ‘the most qualified supplier of 2010’ by Toyota Motor Avrupa (Toyota Moto Europe).Toyota has explained that it has chosen CMS thanks to its‘understanding of high quality and low carbon dioxide level released into the atmosphere’.

CMS, which is the biggest wheel producer of Turkey and the 4 th one of the Europe, has added a new one to its achievements. Toyota supplier awards for Achievement in Quality, which is given every year by Toyota Motor Europe, has been given in March in Brussels, the capital of Belgium.

CMS, which supply wheels to many automotive brands, Toyota in particular, has been chosen by Toyota as one of the best 5 suppliers of the year. Toyota has explained that it has chosen CMS thanks to its ‘high quality and low carbon dioxide level released into the atmosphere’. Ünal Kocaman received the award from Hiroyuki Ochiai, Toyoto Motor Europe Research & Development Executive Vice President.

It manufactures wheels to 14 brands
CMS, ranked as one of the 10 major manufacturers in Turkish automotive supply industry sector, exports its rim wheels to the countries such as Germany, French and Italy in which the heart of the automotive industry beats. CMS, which develops export focused production for the labels such as CMS, Toyota, VW AG (Audi, Bentley, SEAT and Volkswagen), PSA Group (Peugeot-Citroen), Fiat Group (Alfa Romeo, Fiat and Lancia), BMW, Renault and Mercedes, produces rim wheels for the labels, Toyota, Renault, Fiat and Honda in Turkey as well.